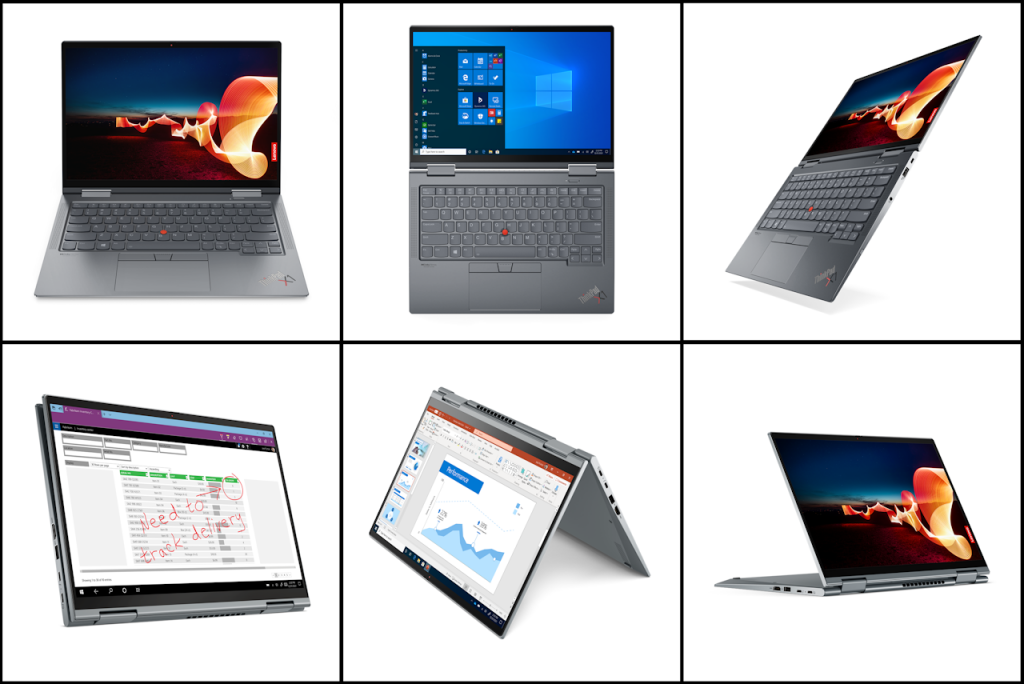 (This is a public draft of an article written for the Lenovo forums.  The “official” version is there – please join that conversation: ThinkPad X1 Yoga Gen 6: Future Perfect?)

The tech world never sits still. Capabilities and capacities – and bang for the buck – keep improving. Somehow, requirements do too. Processing power, RAM and storage capacity, offset by the tug-of-war between upgradability, battery runtime, footprint, thickness, and weight. Even display density and connectivity.

Nothing is ever “future proof” but given the eye-popping specs of the the X1 Yoga Gen 6 that just landed on my bench, I think we can call it “future friendly”. And then some.  Let’s have a look, but first…

From time to time  Lenovo sends me a gadget. They’re handy to have around – both for my own use and when trying to help out in the Lenovo forums. I do some testing and writing as well. Beyond the use of the laptop, I’m not otherwise compensated. Professional images are Lenovo’s.  Amateur snapshots are mine.  Opinions are exclusively mine.  I do not work for, represent, or speak for Lenovo.

I’ve done my best to gather accurate information, but things are subject to change and correction.  Please double-check anything I say here before using it to make a purchase decision. 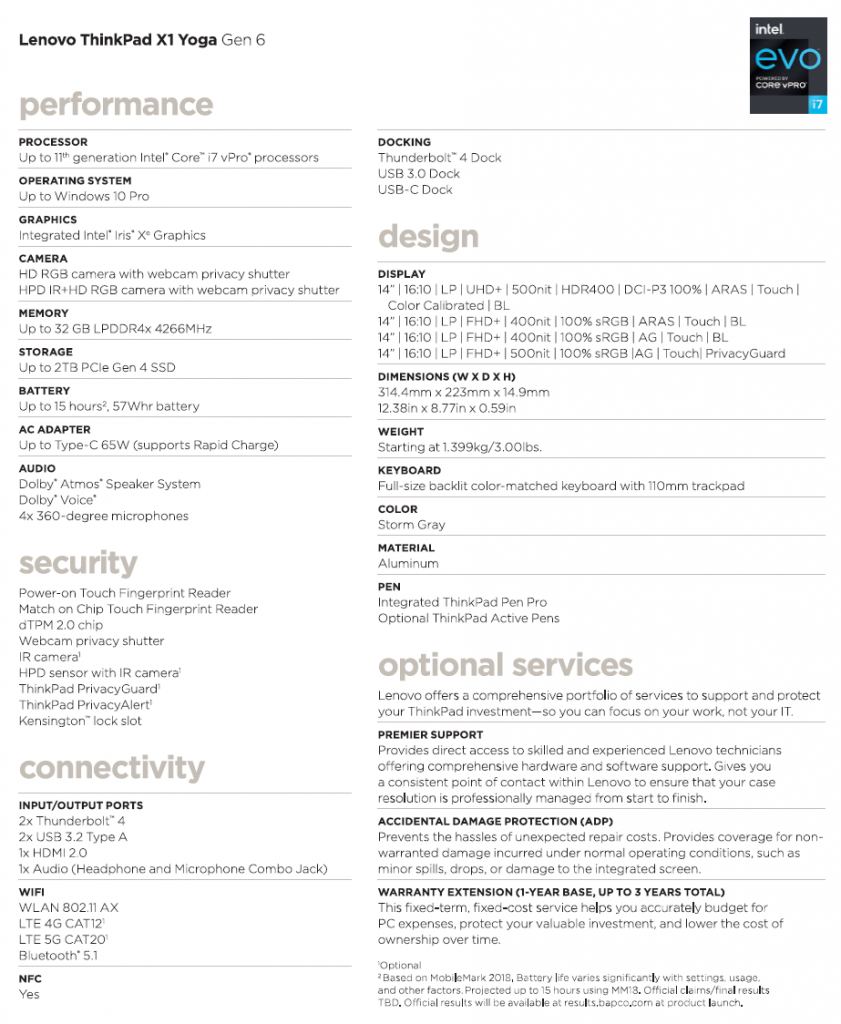 The PSREF pages, and base specification PDF:

I’ve been digging, and here’s what I think I know about the new X1 Yoga’s storage.  There will be two tiers of performance: “standard” gen 3 and gen 4 SSDs that are in the same performance class as the current PCIe 3.0×4 SSDs, and a “performance” tier that is gen 4 only and runs at roughly twice the speed of the current gen 3 offerings.  These higher performing SSDs will be classified as “PCIe 4.0×4 performance” or “gen 4 performance” in their descriptions.  A specific model (MT-M) with “standard” storage may ship with either a gen 3 or 4 SSD.  Performance will be roughly the same for either of the standard SSDs. I do not speak for Lenovo. 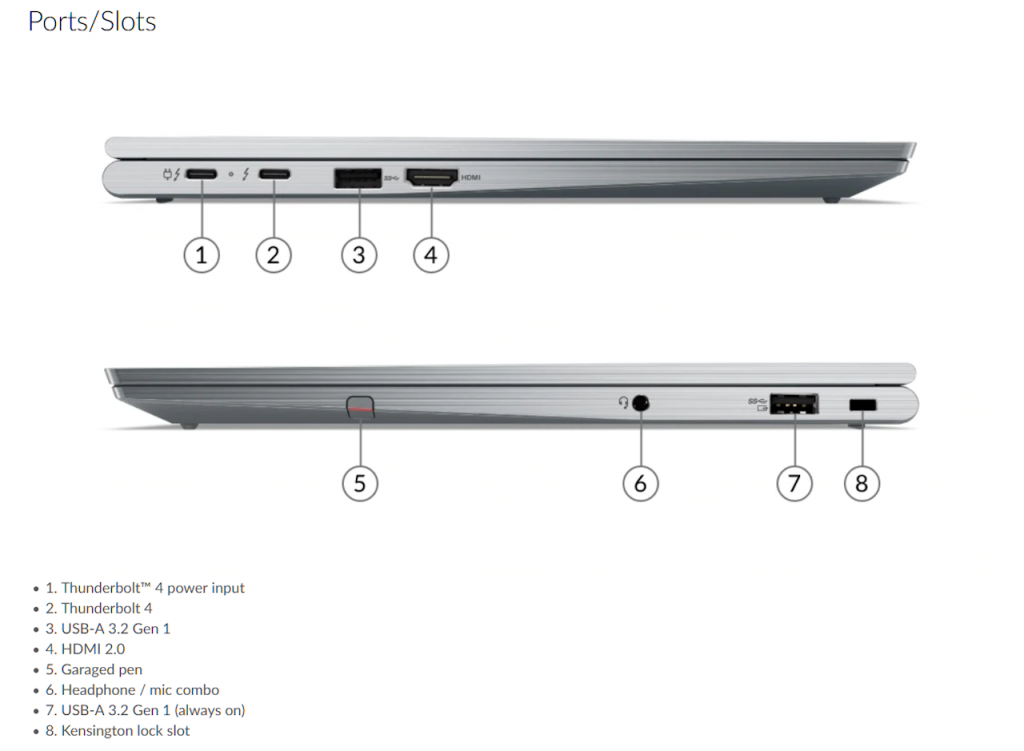 Apart from slight differences in the range of options, and the lid logo, the Gen 4 and Gen 5 X1 Yogas were twins.  The Gen 6 is a major overhaul, upgrade, and re-engineering.  What’s changed?  TLDR: everything 😉

Perhaps the biggest change – across a range of new ThinkPad models – is the switch to a 16×10 display.  For years many of us have wished for more vertical pixels (for that reason a WQHD display has been my sweet spot) and at long last our prayers have been answered.  This is a big deal.  Also a big deal: 2TB gen-4 NVMe SSD options.  Lots of storage – and crazy fast.

The ports have changed too – see above.  They are no longer side-dock compatible so docking solutions will be Thunderbolt 4 most likely, and there’s no proprietary Ethernet port.  Most users won’t miss that latter, but a few of us do occasionally need wired connections – so USB-C or 3.0 dongles, or perhaps via a dock.  Per Lenovo engineering: the laptop has an Ethernet MAC address that is presented if the USB-C adapter is used.

What hasn’t changed is that solid “carved out of solid ThinkPadium” feel (it’s aluminum), excellent keyboard,  and the mandatory-for-a-ThinkPad TrackPoint and buttons.  The touchpad is a bit wider now, but personally, I’m indifferent.  Not a touchpad user.

A few of the notable changes from Gen 5 to Gen 6 – maximum options shown, not all models will have these specifications.  Gen 6 in italics.

In addition to the above differences, there are slight differences in weight and dimensions. Fans (two now) exhaust via read vents.  More significant is the addition of HPD (human presence detection) as an option in the Gen 6.  It can provide enhanced security, convenience  (and perhaps complication) to user interaction.  This bears – and will receive – further examination.

Some amateur pics to show the differences in ports and dimensions: 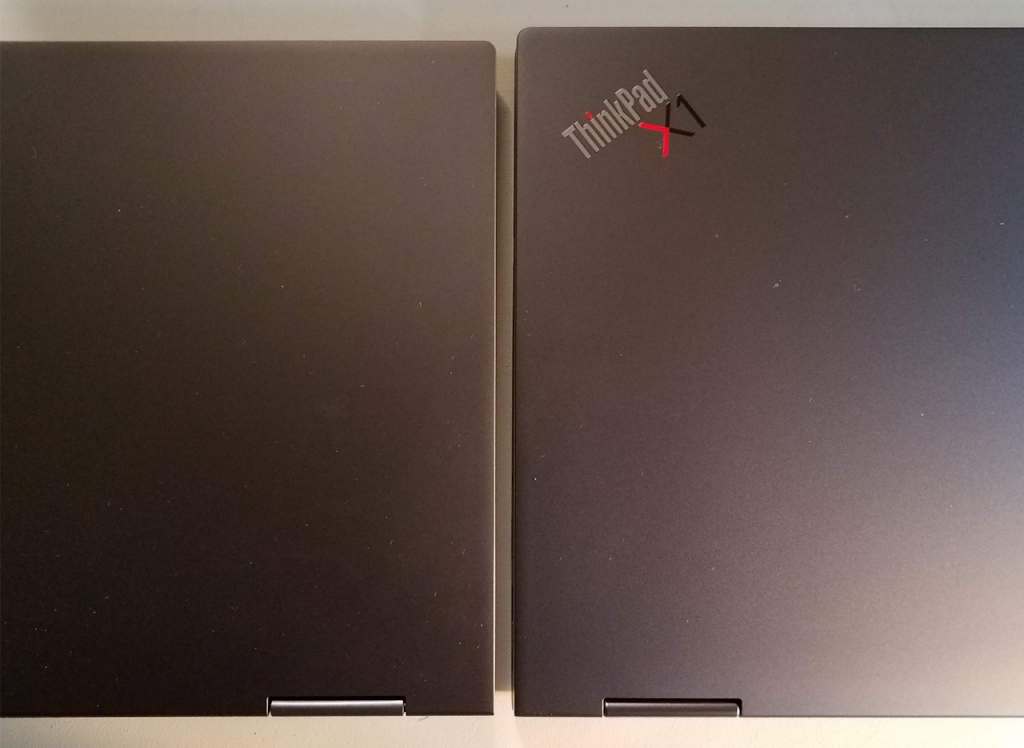 Bonus pic: Top view of the Gen 6 with its compact USB-C charger, a (purchased separately) Lenovo 65W GaN “wall wart” USB-C charger, and a USB-C to micro-USB adapter.  With the wall-wart and adapter in my backpack, I can charge most anything including my brand “S” phone.

[Update 2021.03.10] The corded charger below will charge the laptop, and a Yoga  Tab 3 Pro and brand “S” phone via the micro-USB adapter.  Unfortunately the wall-wart will charge the laptop and phone, but not the tablet.  Unclear which end  is the problem.  A little disappointing, and bears further research. 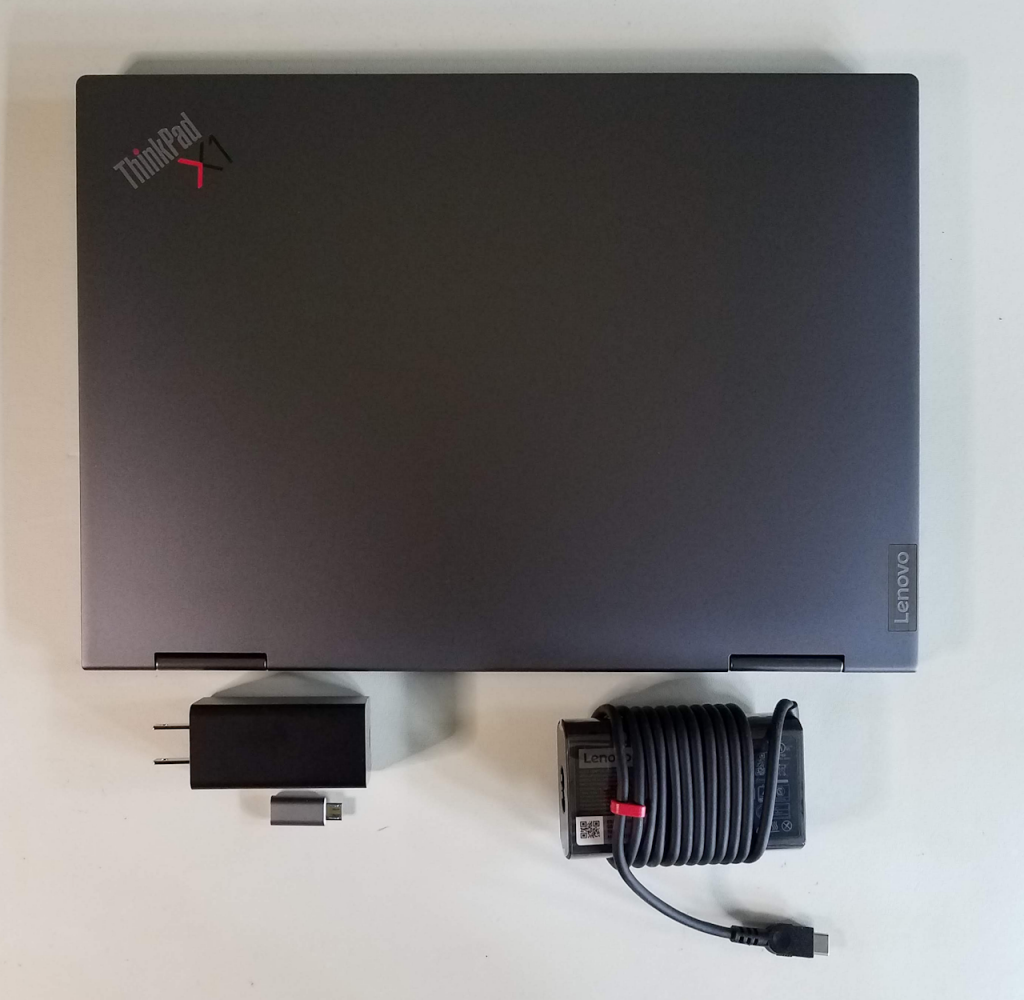 Please note that this is a pre-production machine.   It has some features that are not yet available on the sales site – or in the PSREF specifications.  These are the specs of the machine actually on my bench, but I don’t/can’t/won’t make any promises about what will eventually be available to the general public.  32GB RAM, Gen 4 SSD, and 5G LTE are not generally available as of this writing.  I do not speak for Lenovo.

The Gen 4 SSD performance is off the chart!  Well, not literally… its still on the chart, but I’ve not seen speeds like this before.  Amazing.

Please note that not all Gen 6 Yogas will be configured with a Gen 4 SSD.  Some will be Gen 3. Verify before purchase. 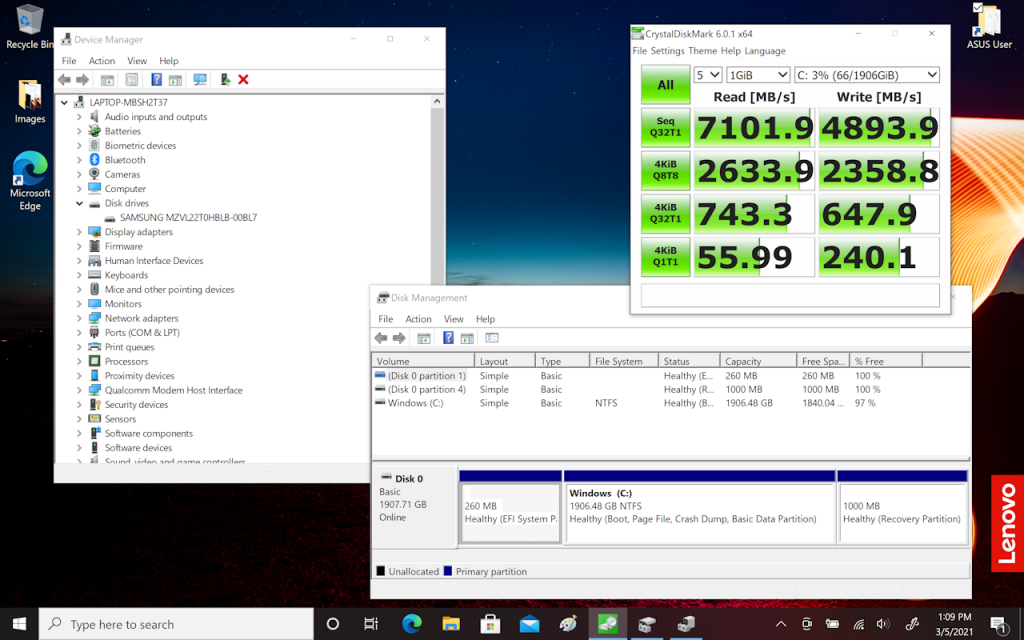 Wifi performance is fist-rate.  My router will actually support 2400mbps link speeds, and the earlier X1 Yogas will sometimes hit that.  I don’t think anything is amiss with the Gen 6.  It may be location re the router or something else. Will continue to monitor but for now it’s fine.  Can nearly max out my cable connection. 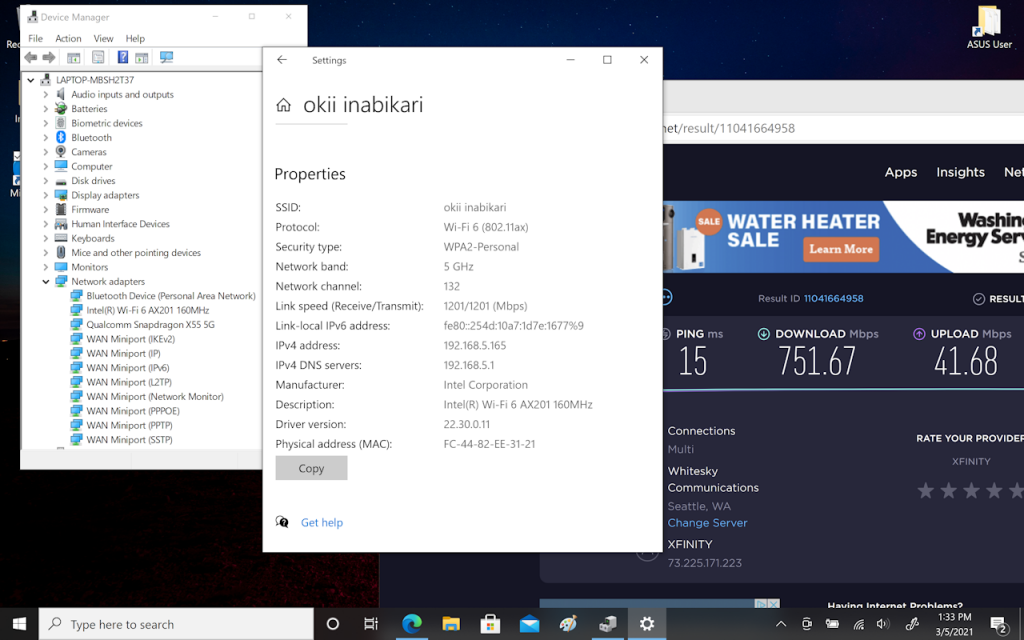 Lastly, what PassMark thinks of the Gen 6.  I don’t generally run benchmarks and won’t try to interpret this.  Posting here for the interested reader. 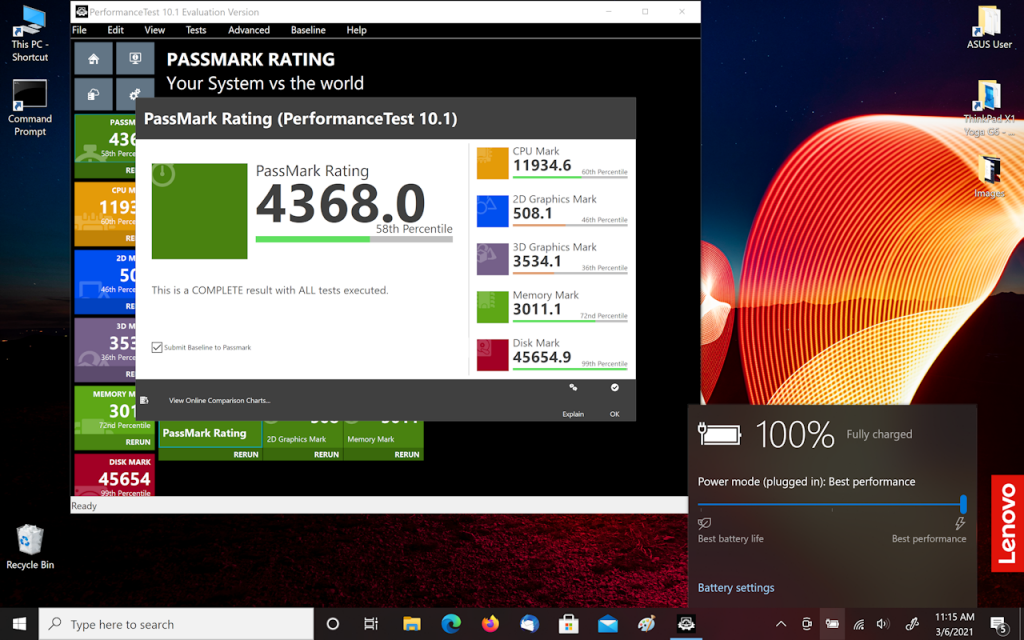 That’s pretty much a given with modern CPUs.  This Gen 6 with its 32GB of RAM and 2TB of storage handles multiple VMs effortlessly. 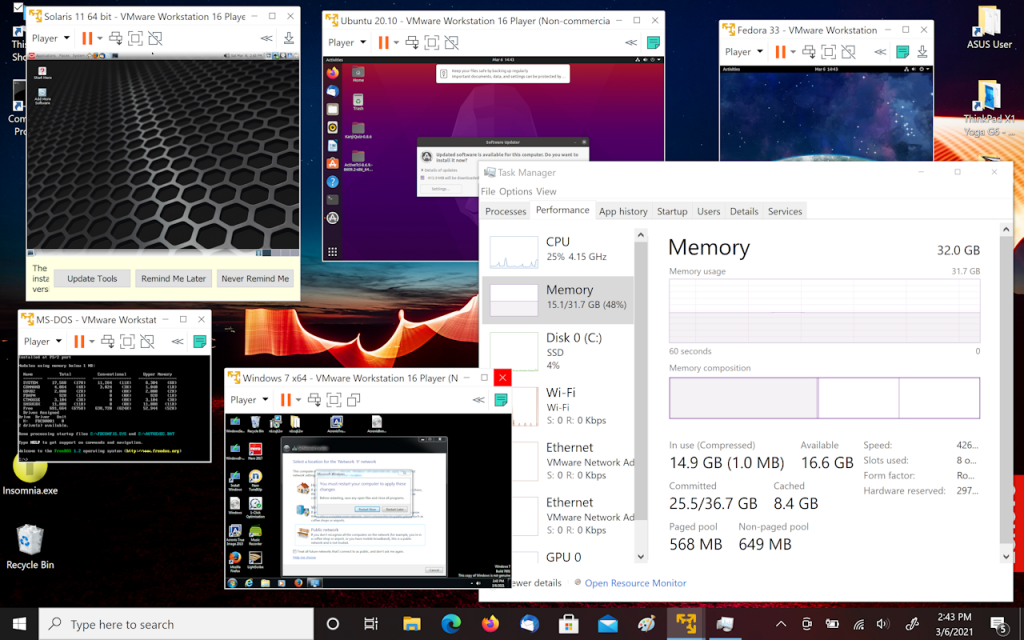 You may notice a problem with these virtual clients: they’re so small as to be nearly unusable.  This is an issue with high-DPI displays.  Thankfully modern Linux distros like the ones I’m usually running have scaling options that can help with this.  For other/older OSen, it can be a real problem.  Some notes on that here: High DPI Displays and Scaling

Ubuntu and Fedora Linux VM clients with scaling in use: 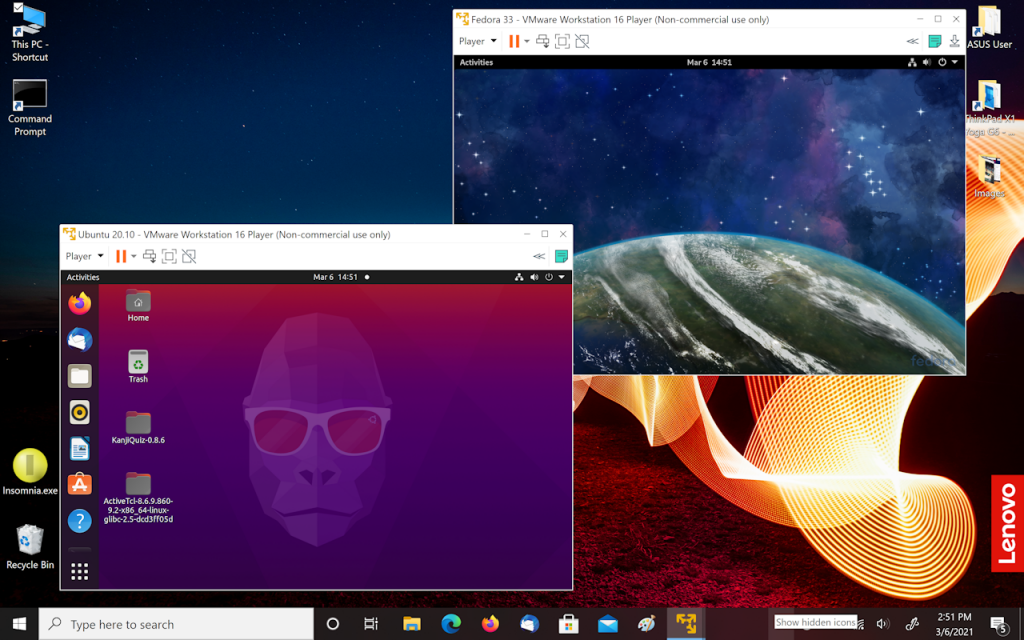 A not-terribly-scientific, but hopefully fairly accurate look at runtime under various loads.  My approach is to let each application run until the “gas gauge” settles down and then grab a screen shot.  Display brightness was about half, and if audio was playing it was set at “20”.

I’d call this pretty decent.  It’s not quite as good as my Gen 5 but it’s pushing a much higher resolution display, among other hardware differences.  The HPD feature with its quick and automatic sleep/wake seems to help with battery usage.  It snoozes when I turn away and wakes when I turn back.  Nearly instantly. 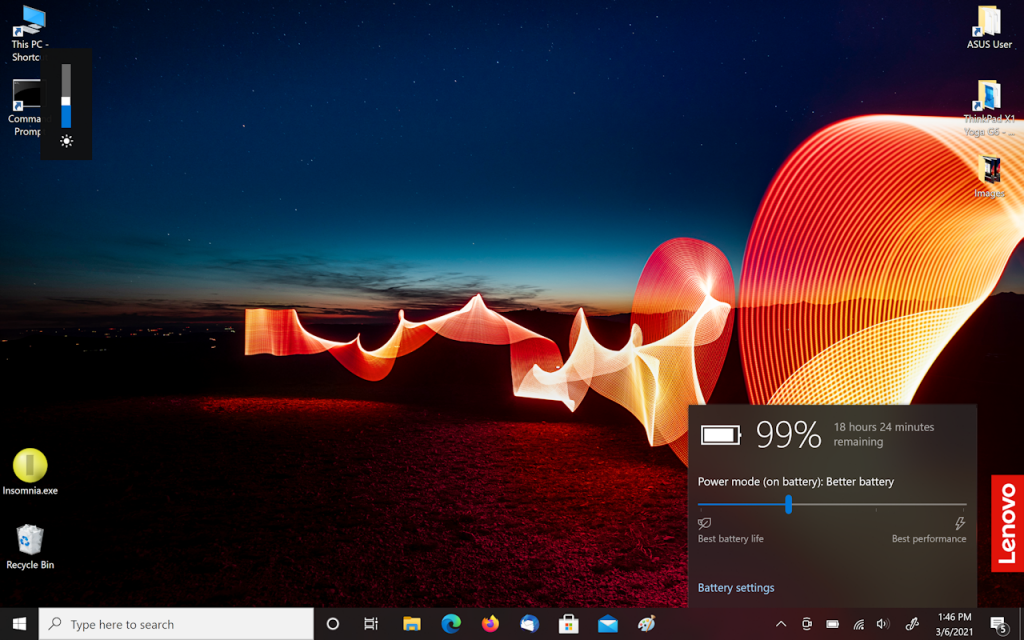 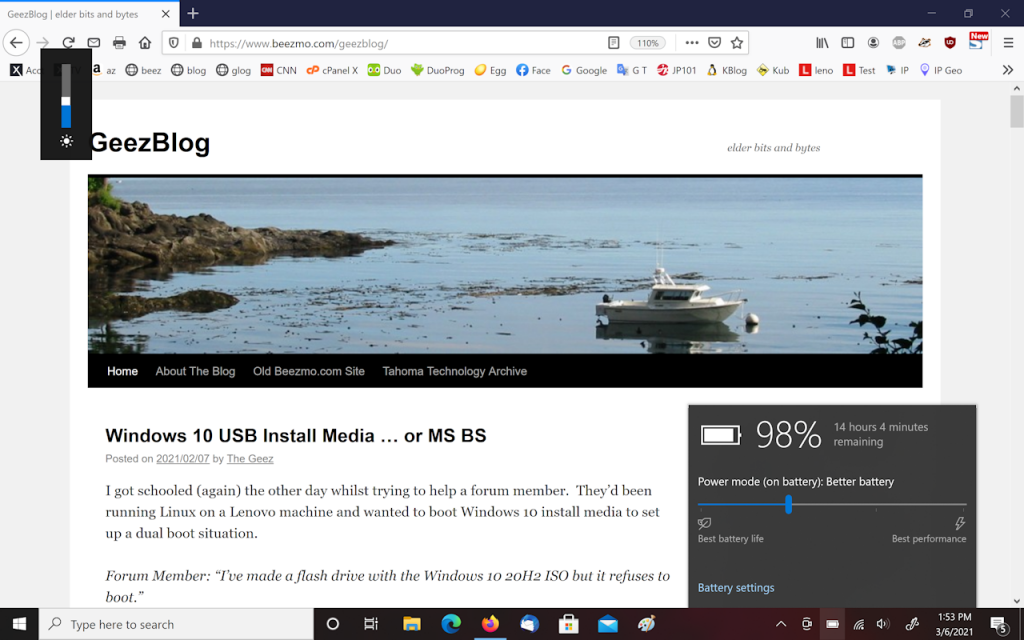 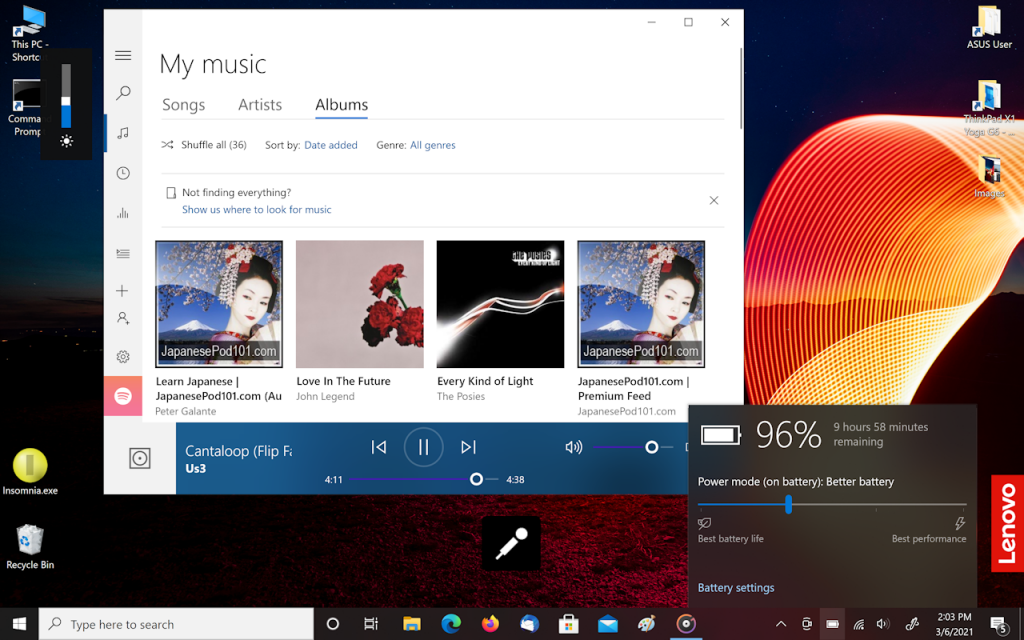 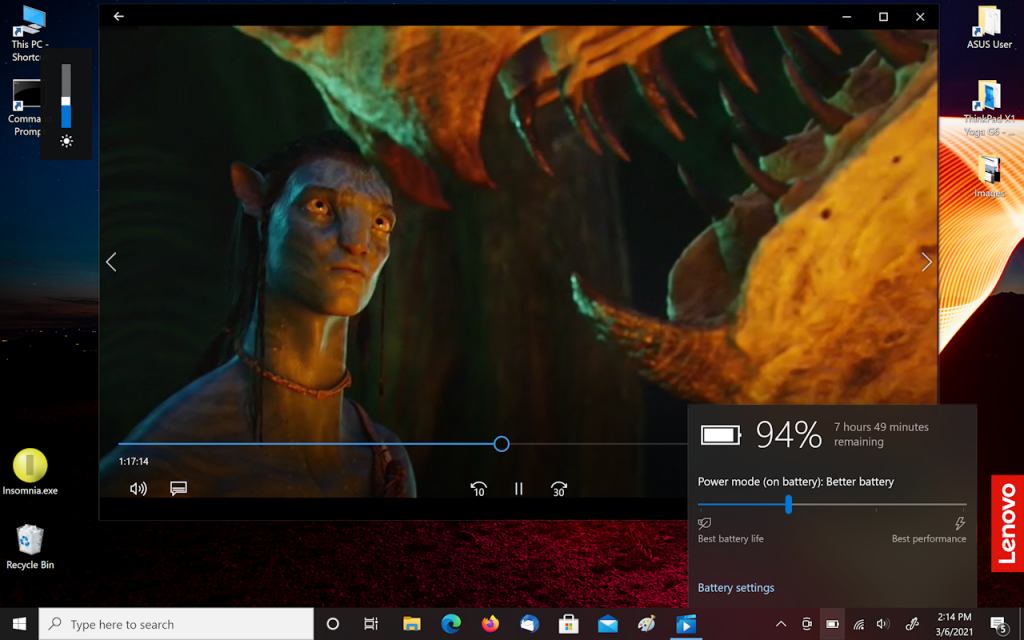 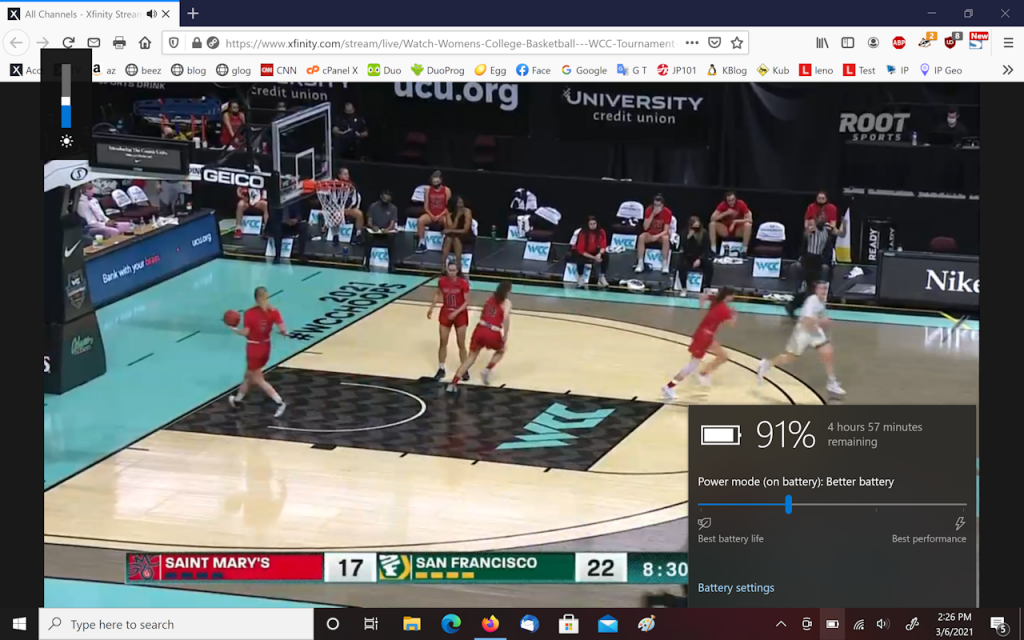 This machine is too new to me to have many fully-ripened opinions.  First take is that it’s fantastic.  Quick and responsive. Long-wanted aspect ratio, lots of RAM, lots of really fast storage, decent CPU, and all that counted-on ThinkPad goodness.  5G LTE.  And some really interesting new features.

Planned follow-on articles will include Linux – live and installed – and a deeper look into new features like Dolby Voice and Human Presence Detection.  Quick take on that: it’s amazing… and a little surprising if you’re not expecting it.

The PSREF pages, and base specification PDF: