For quite some time now I’ve used and enjoyed Philip Brown’s JDrill.  It’s a nifty Java program that lets me practice/learn/remember Japanese Kanji characters.  I keep a shortcut to it on all my monitors.

There’s a rather obnoxious euphemism: “as we go along in life..” (Read: get old..) Sure enough, I’m due for the old-crock large-type version.  That’s a good excuse to try my 2nd GUI program.  (The first was my silly Sudoku solver.)

This one is also a tcl/tk program.  Pics and links below.  It’s new – and rough – so don’t be shy about reporting bugs or quirks.   There’s no connection to Mr. Brown’s site or software – other than admiration and emulation.  It’s a tribute – rather like the way that crappy Elvis impersonator carrying on at your local bar is a “tribute” to Elvis…

This little program has a limited set of features: it can randomly post a Kanji character and five possible English matches (one of which is correct) or v/v – an English quiz word and five Kanji “guesses”.

Multiple grades of Kanji can be selected – one or more – with grade 1 the easiest and “ungraded” the hardest. 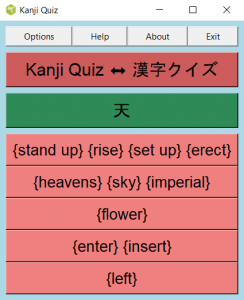 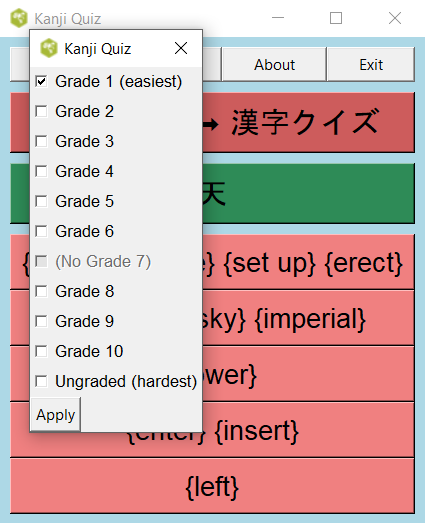 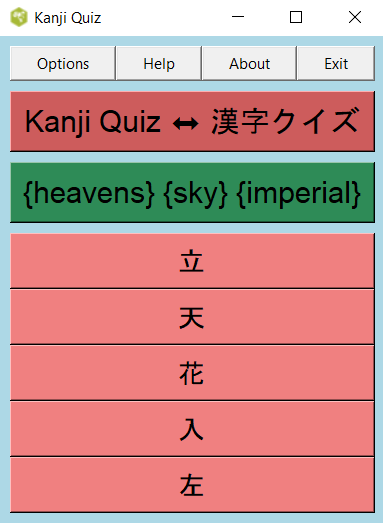 At this time the thing is available in three forms:

A note about the apk: this is very much a work in progress – and a hobby shop deal… The apk seems fine on my Lenovo Yoga 3 Pro tablet.  It will install on my Samsung Galaxy S7 phone, and sort of works.  It’s too large, and pinch-to-shrink isn’t available.  I’m going to continue to work on it – but it (and the other versions…) are strictly amateur productions.

The exe and apk versions include the dictionaries and can be run stand-alone.

If the preference is to run the native tcl program in Windows or Linux a tcl/tk interpreter will be required.  Most Linux distros will include tcl and tk – either already installed or readily available in package repositories.  For Windows, Active State’s Free Community Edition is available.

The dictionary list files were derived from the kanjidic2 xml file available at http://nihongo.monash.edu/kanjidic2/

At this time there’s no provision for saving preferences.  That’s on the TODO list, along with adding a Hiragana option.

(And yes, I know the colors are funky.  Everybody wants to be an art director… sheesh!  So feel free to edit the code…)