Since the P1 Gen 3 is already available, we’ll take a quick look at both sets of base specs.

That last one was a surprise.  Granted we’re well into the wifi era, but occasionally I need a wired connection.  A USB to Ethernet dongle is an inexpensive option, but there may be situations – alternate OS or stand-alone application booted, PXE boot requirement – where native, hard-wired Ethernet is needed.

Specs of this P1 when received:

Asterisk to the asterisk:  Maybe in your dreams.  I’d call this a 6 hour machine.  I’m fine with that given what it can do and how it’s configured – hexacore CPU, UHD, OLED.  But really?  13.8 hours?  Hard to imagine even with a down-spec version.

Yay!  This is not a Modern Standby machine!

I guess Modern Standby is popular, but I’m not a fan of it or its cousin Lenovo Smart Standby.  I don’t particularly want my ThinkPads to act like smartphones for the benefit of a few seconds shaved off wake time – or to have them sleep with one eye open, or listen to me as I get up and shuffle off to the bathroom.

My more recent X1 machines have had Modern Standby support, and Smart Standby was enabled by default.  Laptop woke up at 6AM without so much as a by-your-leave.  That was a bit of an unwelcome surprise.

Very happy that this isn’t a Modern laptop. I don’t know if that’s true of all recent P & W machines, but I hope so.  Wish it wasn’t the default in other lines.  They tend to have a “Linux” option in BIOS (which I’d rather call a “let me decide how my laptop sleeps” option) but that’s not idea for dual boot machines.  It lets Linux sleep successfully but requires a reinstall of Windows.  For the record, I tried just toggling it on an X1 Yoga and things seem fine without a reinstall… but Windows later proved to be unstable.  Set it back to Windows mode and just live with it.

One nice improvement offered with many recent model ThinkPads is a smaller power brick: 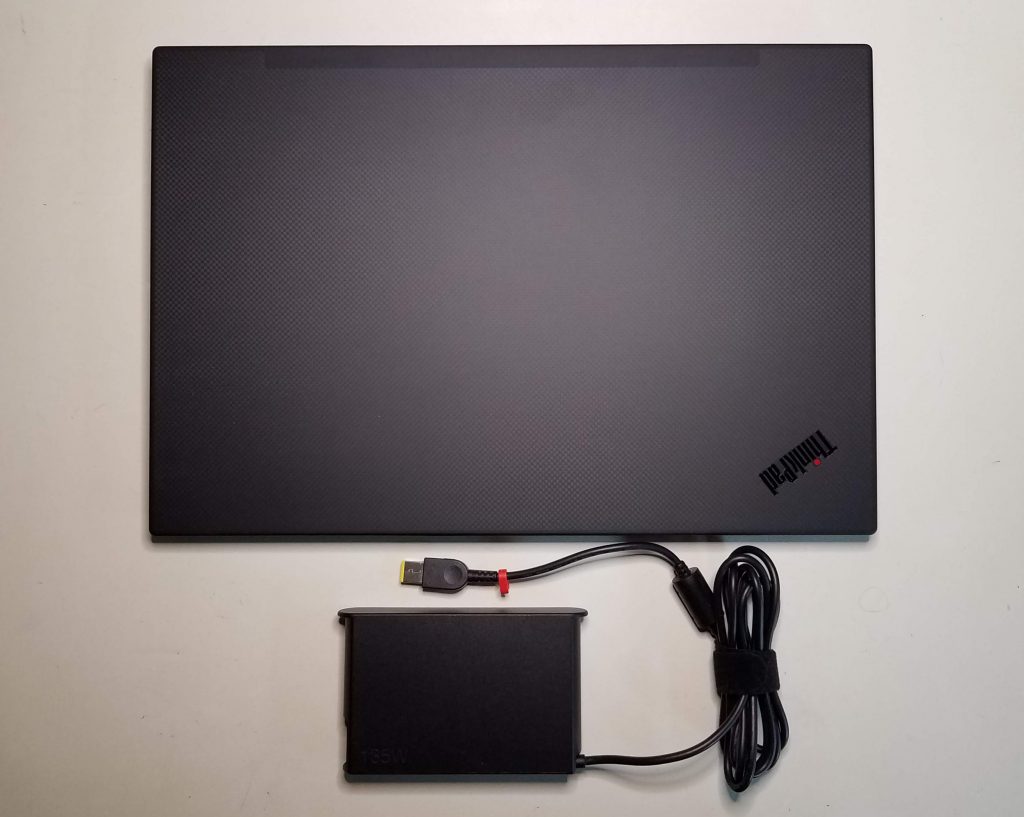 As with my other recent thin(ish) ThinkPads, I’m not entirely happy with the TrackPoint and buttons.  I tend to miss some left clicks, and middle button scrolling isn’t quite what I’d like.  These aren’t fatal, just irritating.  Part of the problem may be muscle memory – my hand position. I’m exploring whether it may actually be TrackPoint sensitivity.  Unintentional motion suppressing the clicks.  Turning off the touchpad seems to help also.  Stay tuned…

I am happy to say that the fingerprint reader on this P1 recognizes me almost every time.  Some of my other machines that use a small reader rarely accept my fingerprint.  I was beginning to think my fingers are defective.