I’ll defer to the excellent set of external views in the First Look article in the forums, but add a shot of the X1YG4 and X1YG1 that gives an idea of the relative sizes.  The G4 has shrunk all the way around while supporting a display of the same size. 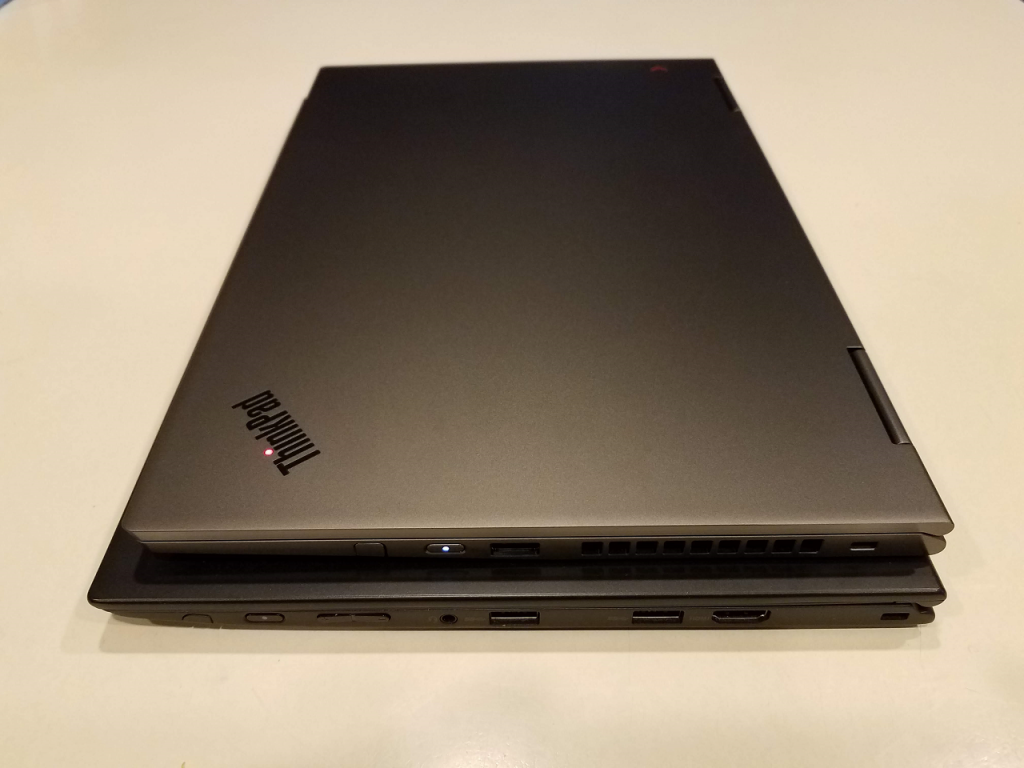 About that display: a laptop with a 14 inch WQHD display is my sweet spot.  14 inches is the right compromise (and not much of one…) of display size, keyboard size, usability on an airplane tray (yoga poses help with that) and ease of tucking into my backpack.

[Update 2019.12.23] Got to put that to the test on an Airbus flight from Seattle to Denver.  The slightly smaller laptop, stand “pose”, and aluminum case worked very well on the steerage-class flight. The slightly tighter dimensions made for an easier fit on that little tray.  Stand mode meant the screen could be used at a decent viewing angle – which couldn’t happen in laptop mode.  The metal case inspired confidence that it could survive the indignities of location and turbulence – and whatever unknowns the previous pilgrim had left on the tray.

[Update 2019.12.27] And on the way back… had it briefly in laptop mode just as the lady seated in front of me slammed her seat backward.  (As they always do) Snagged the top of the display and fired the X1 into my lap. No harm, no foul.  Did I mention that the case is Aluminum?  This thing feels like it was carved out of a single block of ThinkPadium 😉

WQHD for a couple of reasons: the extra pixels are useful when working with windowed apps like editors and virtual machines that use a lot of window decoration in addition to the workspace.  WQHD just looks better than FHD, and IMNSHO holds up well even on a 24 inch desktop monitor.  UHD (and OLED) is prettier yet, but when using apps that don’t scale well, or more so when booting something that doesn’t have a GUI interface, the text is microscopic.  Even at WQHD resolution a grub boot menu is almost too tiny for my old eyeballs, and editing it on the fly is a challenge: 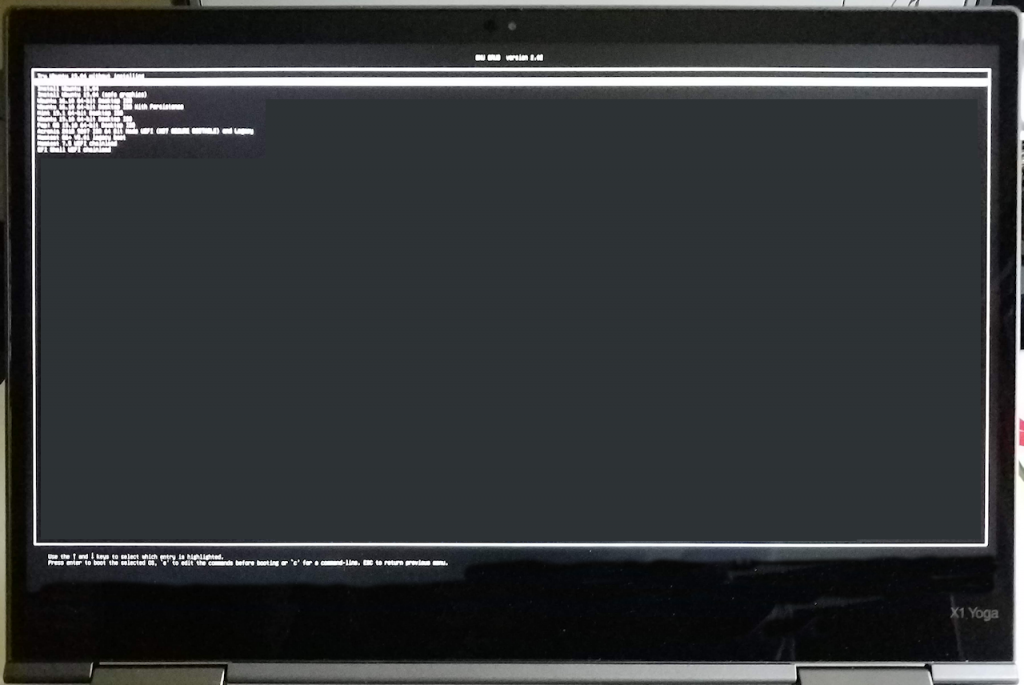 NOTE: the WQHD display brightness is 300 nits.  That’s fine for me, but may not suit others who need a brighter display.  Other display options provide 400 or 500 nits.

Then there’s the color:  I’m in the “ThinkPads have TrackPoints and are black” crowd.  This one is iron gray and is very good looking, so I’m going to have to loosen up a bit.  How about “light black”?  Works for me…  I don’t know if the color was dictated to some extent by the aluminum case or was purely a cosmetic choice.  Either way, fine.

TrackPoint buttons: As the X machines get thinner and smaller all-around there’s less and less space for buttons and trackpad.  The buttons have flattened out over the generations to the point that with the X1YG4 there’s pretty much no vertical relief at all.  My (finger) muscle memory goes back to the R40, and I’ve got to learn to address the buttons differently.  When I don’t keep that in mind I may lose selection during drag-and-drop, or just miss the click entirely.

The Gen 1 X1 Yoga had a strip between buttons and touchpad that was beveled down toward the buttons.  The X390 yoga doesn’t have that strip but the buttons still sit proud of the touchpad.  The Gen4 Yoga has buttons almost flush with the touchpad.  This makes it difficult to fully press them with my thumb with my hand in the usual position – flat on the palm rest.  By raising my hand a bit, and/or making sure I press directly down on the buttons and don’t let the touchpad interfere they seem to respond reasonably well.

This is going to be a subjective thing.  I think I can re-educate the digits, but only time will tell.  (I was mistaken, see below…) 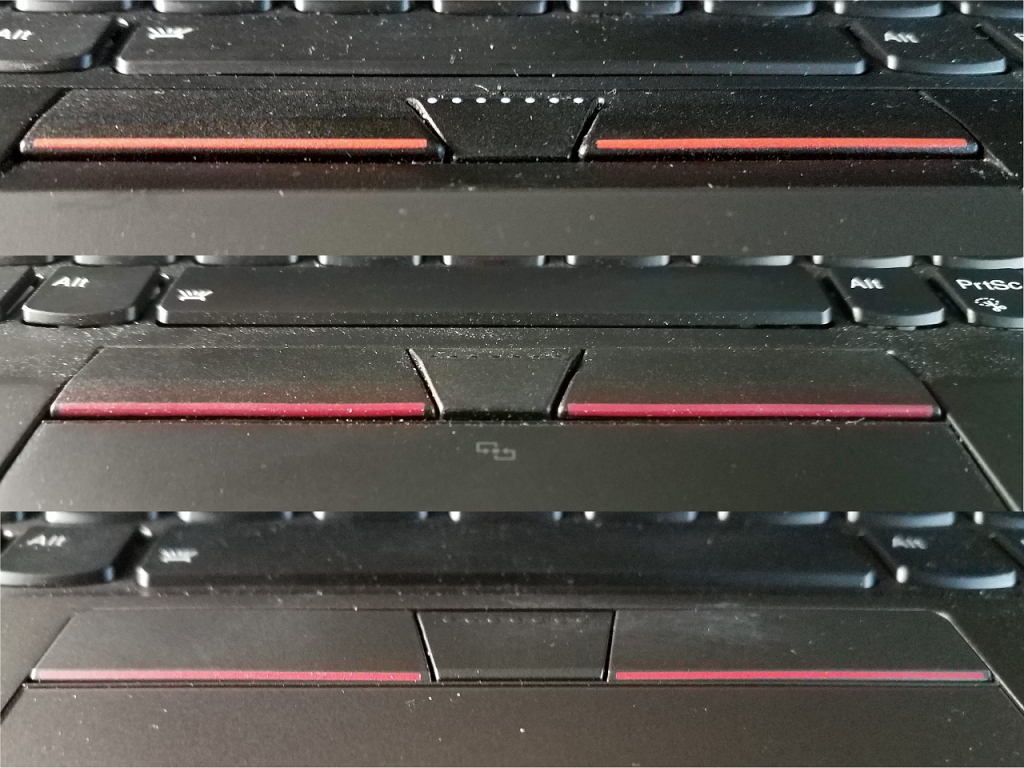 [Update 2020.07.06] The TrackPoint button issue has been corrected.  It turned out that the problem was a defective touchpad of all things.  My new Gen 5 – X1 Generations – ThinkPad X1 Yoga Gen 5 – had buttons that worked perfectly, and were mechanically identical to this Gen 4’s.

I pursued the issue with support and sent the Gen 5 in for a keyboard replacement.  They turned the machine around in one day… and replaced the touchpad – “erratic cursor” was the diagnosis. I thought they were nuts, but props to them and a forum mod who explained things: the touchpad was sending random events via the same internal USB hub that the buttons use.  This was causing button events to be frequently missed.  Amazing how well it simulated a mechanical issue.  My “deep press” was more likely a “long press” that managed to get the event through.

Fingerprint Reader:  Not much to say.  My older ThinkPads with large press or swipe readers still recognize my fingerprints.  The newer, smaller press-type readers rarely do.  I’ve decided my fingers are defective 🙁

Side Docks: Using a Lenovo image of the X1 in a side dock.  Mine will connect with my 40AJ Ultra dock but is mechanically a little balky.  My other compatible laptops click in fine, so looking into this.  I can’t say if it’s the laptop, the dock, or both… or neither.  Will update when this is sorted.

[Update 2020.01.21] The issue was with the dock.  It was a pre- or early-production unit that predated the Gen 4 Yoga.  Modifications were made to later-production docks to ensure easy docking with the Gen 4.  Thanks to the Lenovo QA team for chasing this down.

Per the Compatibility Matrix this laptop should be compatible with all the side docks: 40AJ Ultra, 40AH Pro, and 40AG Basic. 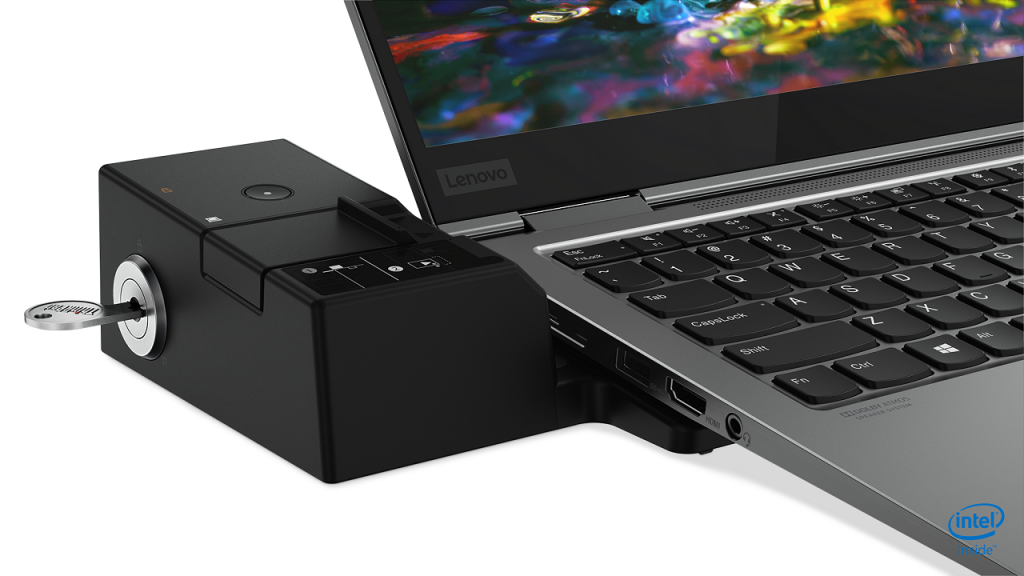