Hello internet. Been awhile. How are things? After more than a few years of constant pressuring I am back to update the blog with a few photos! As we all know, school cafeteria food is total garbage in terms of preparation, quality, taste, ingredients and health benefits. So I thought I’d show you how they do it over here in Japan. Trust me, it’s way better over here. On to the photos! 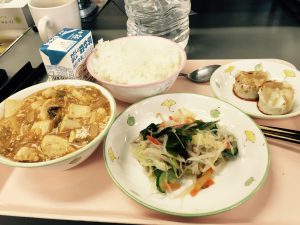 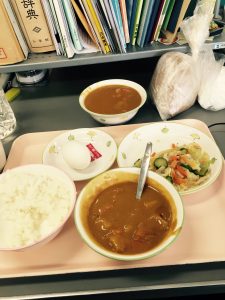 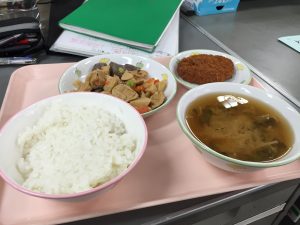 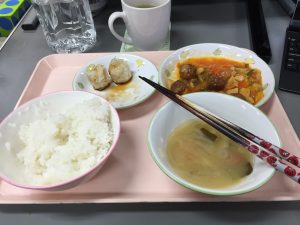 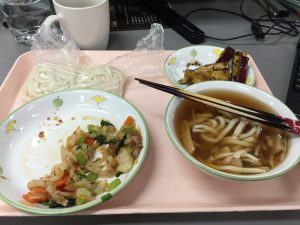 The above posted were the Japanese take on Chinese food, Indian food and Western style frying of meats. All fantastic. In six years I think I’ve had a bad school lunch only four times. Speaking of which, time to eat. 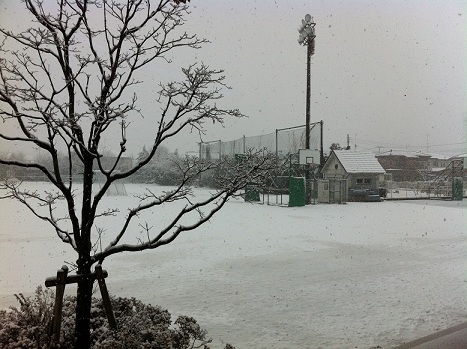 Ah that new blog smell. Always a fan. This will be a short post to test out this fancy new WordPress thingy. The bigger update will come sooner.

As for news, the school year is about a month away and things are going smoothly. Managed to avoid catching the flu this year which I’m grateful for. Got a cold for two weeks straight but thats better than influenza.

Biggest news at the moment as I have recently applied for a new apartment and have been given the go ahead to rent it. I’ll be moving on the 10th of March. The place is astounding. Apparently it was previously the building owner’s home and has been completely renovated over the last year. Its about as fancy as I could ever hope for and the best part is that its closer to the station, only $30 dollars more a month and of course, is 4 times the size of my current place. Good timing no?

Once the actual move is complete I’ll get some photos up here for everyone to enjoy. Until than, ciao!

Herro. It is officially November. Well, its well into November and its getting close to December but you get the idea. There have been a few fun adventures as of late and I look forward to telling you all about them. Lets begin.

First up: The annual teacher's retreat/vacation. I was invited yet again to head off on a tour bus with my colleagues from the junior high school for a weekend of frivolity, tourism and beer. I can't imagine a world where I would have issue with these three things.

The morning before we had our annual choir festival. The kids all sang wonderfully and class 3-3 ended up winning the top prize so they were able to represent their school in the junior high city competition. Not sure how they did but either way all the classes sang wonderfully. Around 6:30pm we hopped on our private jumbo bus and made our way off to Ikaho, Gunma prefecture. As is typical of any Japanese adventure on a bus, there were chocolates, potato chips, sake, beer and of course dried squid. I will never under any circumstances understand the Japanese love for dried squid while traveling. Since I was already feeling very car sick the smell of dried and somewhat rotted squid was how can I say…disruptive. Luckily my colleagues encouraged me to get over my car sickness with a healthy (unhealthy) amount of beer and sake. Surprisingly it worked.

We arrived at our destination roughly 2 hours later. After departing our private bus we then took the next step in our great journey: we got on another bus. Which only drove for 1 minute. Up a hill.

Our location was incredibly luxurious and after depositing our belongings into our respective rooms I had this thought: Man, now that we're here, the only thing that would make this trip even better would be to get naked with a whole bunch of dudes. Well, as luck would have it, it was hot spring time! Since this was my 3rd or 4th visit to a hot spring I was already used to the concept of stripping down with my cohorts. The first time I did it I was absolutely terrified at the idea but what can you do.

After that we enjoyed an incredibly luxurious traditional Japanese meal in a very spacious old fashioned tatami room that probably could have sat about 40 people. There were only 12 of us. The food was exquisite, the company was excellent and of course there was more beer. We ended up socializing the night away until the late hours.

Predictably, 10 out of 12 of us had some very severe headaches the next day when we got up at 7:30. I'll never understand the Japanese dislike for, well, you know, sleeping in. Personally I think there is no better way to spend one's vacation time. After our traditional breakfast we hopped on our hotel bus, to head to the parking lot one minute away, to get on yet another bus. After about an hour we made our way up into the mountains to Haruna Shrine. Apparently its a very famous shrine and known as a "Power Spot" which is supposed to energize one's body and spirit. I must admit to having felt a bit energized after the visit. When the carsickness went away anyway.

After that we visited a delicious Udon noodle restaurant and a fun shopping center for some souvenirs. There is officially no country more into souvenirs and gift buying then the Japanese. Its one of those parts of the culture that some of my Japanese friends admit to being very annoying at times. Don't forget presents for your accountant's cousin's nephew or it'll be rude! I realize thats a joke but its not that much of a stretch I assure you.

We finally made our way home to Kuki City around 5pm and everyone went their separate ways. Since that Saturday was the choir festival, all the teachers at junior high had the next day off. Since I don't work at junior high on Mondays I predictably did not. Oh well. Was a fantastic adventure and I look forward to the next one.

A random story to share while enjoying the currently bizarre weather of today.

I was on my way home from the local 7-11 one day when something peculiar happened. As I approached my apartment with my bag of delicious goodies in hand I noticed an elderly woman across the street from me who was watching me very intently. Before I made it home she had run across two lanes of traffic to intercept me outside of my place. She was very friendly and had a big smile on her face so I didn't feel too awkward at being stopped by a stranger in front of my humble abode.

"Hello! I'm so sorry to bother you but are you from America?"

"Are you a teacher?"

"Thats so wonderful! And you speak Japanese?"

"Yes I do." (This entire conversation was already in Japanese of course. I get this a lot.)

"Thats so wonderful! I've always dreamed of meeting a foreigner who could speak Japanese with me. What a wonderful day this is! Thank you so much!"

She then went on to tell me how she had met foreigners before and wanted to communicate with them but they never spoke Japanese and she couldn't speak English. She also told me a story about a few friends of hers from Australia but she didn't think she'd see them again anytime soon because of the big earthquake that had hit. After mentioning the earthquake her eyes went wide as if some giant realization just dawned on her.

"Oh my, where are my manners! Do you have enough food?" (This was about a month after the big earthquake.)

"Oh yes I have plenty. Thank you for asking but I'm fine and well prepared."

"Please wait here a moment I'll be right back!"

She then ran across the street to her car, fumbled around for about 5 minutes in her trunk and came back with a giant bag of uncooked rice and some turnips. She said all of it was from her family's farm and that they had plenty. She offered them to me and wouldn't take no for an answer so I humbly accepted the gifts. Thinking thats where the conversation would end I was surprised when she had a request of me.

"I'm so sorry to trouble you with this, but would you mind signing my journal?"

She then quickly produced a small diary esque notebook from out of nowhere that had all manner of random writings in it. After signing my name and also writing it in Japanese I handed it back to her while she stared at me with a big smile.

"Thank you so much! This has been the most perfect day! Please enjoy the rice and I hope I see you again soon!"

Before I could get another word of thanks in for the rice she was already running back across the street to her car never to be seen again. A delightfully random event here in the land of the rising sun.